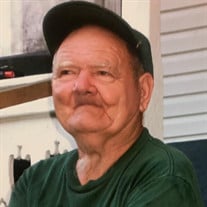 Ralph Dewayne Swiger, 83, of Beech Lick Salem passed away on January 1, 2022 just 16 days after his wife of 66 years, Patricia Ann (Crislip) Swiger. He was born on Oil Ridge in Ritchie County on February 1, 1938, a son of the late Ralph and Wuanita (Isner) Swiger. Ralph and Patricia were married November 26, 1955. Surviving is one son Thomas Wayne Swiger, one daughter Joyce Ann Swiger, two grandsons, Jeremy Wayne (Spring) Swiger, Jordan Thomas (Kristy) Swiger, three great grandsons, Jeremy Wayne Swiger Jr., Jared Ray Swiger, Jacob Maxwell Swiger, one great grandson on the way, Canaan Michael Swiger. Siblings Ray Swiger and Brenda Sue Rafferty. Sisters-in-law Naomi Williams, Dorothy Davis, Doris Pratt, Dian Currey, brothers-in-law Gary Crislip and Rex Crislip as well as many nieces and nephews. He was preceded in death by his parents Ralph & Wuanita, his in-laws Elmer and Roxie Crislip, daughter-in-law Zelma Kay Swiger, brother Rex Swiger, and close Uncle Roger Swiger. Dewayne, a retired Doddridge County Schools bus driver, served 3 generations of families on his bus routes, a fact that he was very proud of. He was employed by the school system for over 35 years as a driver, mechanic and summer maintenance. He had also worked at B&K Tractor in Salem and worked cutting right-of-ways and as a logger. Dewayne was a lifelong farmer raising beef cattle and producing many wonderful gardens with his wife and family. He was a member of the Doddridge County Senior Citizens and the Avon Church. “Pap” was known for his sense of humor, his never-ending patience and his willingness to always lend a hand when needed. He reminded everyone he met that “We’ve got to have a little fun in life” and he did, spending his retirement years on the farm and enjoying his family. Funeral services will be conducted in the Spurgeon Funeral Home 56 Front St. West Union on Friday, January 7, 2022 at 1:00 p.m. with Pastor Roger Fontaine presiding. Interment will follow in the Union Mission Cemetery, New Milton. The family will receive friends in the funeral home chapel on Thursday, January 6, 2022 from 4-8 p.m. Spurgeon Funeral Home is privileged to serve the Swiger Family.

Ralph Dewayne Swiger, 83, of Beech Lick Salem passed away on January 1, 2022 just 16 days after his wife of 66 years, Patricia Ann (Crislip) Swiger. He was born on Oil Ridge in Ritchie County on February 1, 1938, a son of the late Ralph and... View Obituary & Service Information

The family of Ralph Dewayne Swiger created this Life Tributes page to make it easy to share your memories.

Ralph Dewayne Swiger, 83, of Beech Lick Salem passed away on...

Send flowers to the Swiger family.