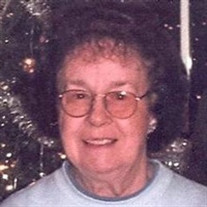 Pauline Virginia McKinney Reed Greaver, 87, of Sunnyside Rd., West Union departed this life on Tuesday, December 9, 2014 in United Hospital Center surrounded by her loving family. She was born September 23, 1927 in Wilbur, WV a daughter of the... View Obituary & Service Information

The family of Pauline Reed Greaver created this Life Tributes page to make it easy to share your memories.

Send flowers to the Greaver family.