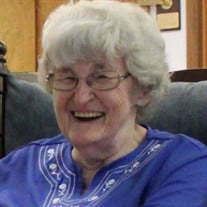 Patricia Ann (Crislip) Swiger, 85, peacefully went to be with the Lord on Wednesday, December 15, 2021 at her home. She was born at her home on August 23, 1936 at Beechlick a daughter of the late Elmer "Peasley" Crislip and Roxie Morgan Crislip. Her husband of 66 years Ralph Dewayne Swiger whom she married November 26, 1955 survives. Also surviving is one son, Thomas Wayne Swiger, one daughter, Joyce Ann Swiger, two grandsons, Jeremy Wayne (Spring) Swiger, Jordan Thomas (Kristy) Swiger, three great grandsons, Jeremy Wayne Swiger Jr., Jared Ray Swiger & Jacob Maxwell Swiger; one great grandson on the way, Canaan Michael Swiger. Siblings, Naomi Williams, Dorothy Davis, Doris Pratt, Dian Currey, Gary and Rex Crislip, brother-in-law, Ray Swiger, sister-in-law, Brenda Sue Rafferty and several nieces and nephews. She was preceded in death by her father-in-law, Ralph Swiger, mother-in-law, Wuanita Swiger, daughter –in-law, Zelma Kay Swiger, brother-in-law, Rex Swiger. Patricia was a Christian by faith, a member of the Avon Church and most recently attended Mt. Vernon Baptist Church. She was a 57 year member of the CEOS/Homemakers Club. Patricia had worked as an election official for many years in Doddridge County and was a member of the Doddridge Co. Senior Citizens. She was a graduate of Doddridge County High School Class of 1955. "Momaw", as her family affectionately called her, was known for her love of her family and friends. The many wonderful foods she prepared (especially her mince meat pies) and her bountiful gardens and canning projects. She always had fresh tomatoes in the window sill and beautiful flowers growing in the yard. If anyone ever left her presence hungry, "It was their own fault". Funeral services will be conducted in the Spurgeon Funeral Home 56 Front St. West Union on Sunday, December 19, 2021 at 1:00 p.m. with Pastor Roger Fontaine presiding. Interment will follow in the Union Mission Cemetery. The family will receive friends in the funeral home chapel on Saturday, December 18, 2021 from 2-8 p.m. and after 10 a.m. on Sunday until time of service. Spurgeon Funeral Home is privileged to serve the Swiger family.

Patricia Ann (Crislip) Swiger, 85, peacefully went to be with the Lord on Wednesday, December 15, 2021 at her home. She was born at her home on August 23, 1936 at Beechlick a daughter of the late Elmer "Peasley" Crislip and Roxie Morgan Crislip.... View Obituary & Service Information

The family of Patricia Ann Swiger created this Life Tributes page to make it easy to share your memories.

Patricia Ann (Crislip) Swiger, 85, peacefully went to be with...

Send flowers to the Swiger family.