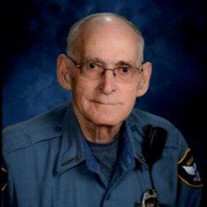 Jennings Junior Thompson, 78 of Canton Rd. West Union departed this life on Tuesday, April 13, 2021 at his residence surrounded by his loving family. He was born in Clarksburg on September 13, 1942 a son of the late Walter James and Lena Maxine... View Obituary & Service Information

The family of Mr. Jennings Junior Thompson created this Life Tributes page to make it easy to share your memories.

Send flowers to the Thompson family.