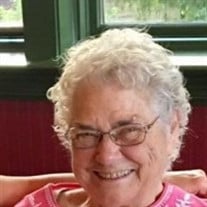 Mrs. Clara (Fleming) Ford, born on September 2, 1930 died November 12, 2018 at age 88. Clara was a resident of West Union, Doddridge County, and previously a resident of Clarksburg. She was the daughter of Kenneth and Jessie (Goebel) Fleming. She was the half-sister of Jack, Allen and Ellen Jane Fleming. She was wife of the late Jack E. Ford and mother of Karen (Ford) Nardelli, wife of Louis G. Nardelli of Clarksburg, and the late Sandy Ford. She was grandmother of Louie J. Nardelli (wife Christine), Natalie (Nardelli) Gigliotti (husband Tony), and John Paul Nardelli (wife Kelly). She was great-grandmother of Julian, Stella, Noah, Michelangelo, Alexey, Luca, Carmela, Zelie, Finn, and Rosario.   Clara’s grandparents, Henry Ward and Myrtle (Asher) Fleming, raised her on their family farm. She attended Doddridge County High School and graduated a bright and beautiful young woman. Clara married Jack in 1948 at the age of 18. Before raising her two daughters, Clara worked in payroll for Munsing Motor Company. Once her children grew, she returned to work as a payroll clerk for J. F. Allen Company, Union National Bank and the Harrison County Board of Education. She was also a secretary at Bridgeport High School and Vanhorn School in Salem. She traveled the world with her husband, and she consistently caught more than he did on their fishing trips. Upon retirement, Clara and Jack moved to Doddridge County. Clara enjoyed reading, knitting hats and scarves for her family, and caring for her dogs. She made homemade applesauce and canned many foods from the garden. She was a blessed soul who was content to think of others before herself. She expressed her steadfast faith in Christ through her self-giving, patience and prayer life. She cherished her time with her daughters. All those close to Clara will remember her as a calming presence that listened, loved and laughed.   The family would especially like to thank Peggy Minear and Amedisys Hospice for their love and care.   A Mass of Christian Burial will be celebrated in St. James Catholic, Pride Ave.  Clarksburg on Thursday, November 15, 2018 at 10:00 a.m. with the Reverend Father Akila Rodrigo as celebrant.  Interment will follow in the Masonic Memorial Park, West Union.  The family will receive friends on Wednesday November 14, 2018 from 4-8 p.m. in the Spurgeon Funeral Home 212 Front St. West Union and from 8-9:45 a.m. on Thursday in the St. James Catholic Church.  Spurgeon Funeral Home is privileged to serve the Ford family.

Mrs. Clara (Fleming) Ford, born on September 2, 1930 died November 12, 2018 at age 88. Clara was a resident of West Union, Doddridge County, and previously a resident of Clarksburg. She was the daughter of Kenneth and Jessie (Goebel) Fleming.... View Obituary & Service Information

The family of Clara Ford created this Life Tributes page to make it easy to share your memories.

Send flowers to the Ford family.